Off in the distance

Harley trotted along the gravel covered trail.  The afternoon sun hid behind the towering trees, creating a much appreciated canopy.  The crushed rocks crunched under his paws.  Various smells - pine, soil, grass, citrus - forever changing, repeatedly stole away Harley's attention.  A twig snapped.  He froze.  His ears perked.  His eyes saw a shadowy figure in the distance.  Harley sped off.  Closing in the gap, Harley barked blissfully in response to the familiar smell of cigarettes and peanuts.

"There are you boy!"  The man crouched down, his arms opened wide.

Harley licked his owner's face with ecstatic excitement.   Once again he'd managed to get lost.  One of these days I may not be so lucky, Harley thought.  Need to keep this man on a  leash! 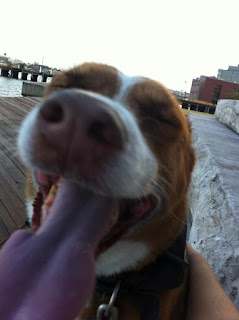