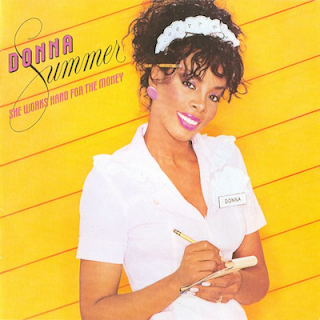 One week after MCA's death, I woke up to learn that yet another beloved musician that has had a large impact on my life also past. On Thursday, May 17, Donna Summer died of cancer at age 63.

My earliest memory was seeing the video "She Works Hard for the Money" on MTV in the early '80s.  It was the first video by a black female artist to be placed in "heavy rotation."  I loved the song so much, I saved up my allowance to buy my very first LP, Donna Summer's eleventh studio album, also named "She Works Hard for the Money."  I wore the album out so much that the song doesn't sound right without the permanent skips from scratches.

Who knew that over 20 years later she would also have an influence on my writing career.  A friend had mailed me the article, "Let's embrace our heritage of many cultures: celebrate how diverse Black people are" written by Donna Summer from the September 2008 issue of Ebony magazine.  I had no idea that her racial background included Native American, Dutch, Irish and French Canadian.  I, too, am mixed - my father's Black and my mother's German.  So, my main characters are of color who deal with everyday contemporary issues, but from the perspective of someone who doesn't fit neatly into a one race check-box.

Growing up bi-racial, I never completely fit in with the white or black crowds.  And even with a sibling, because of different physical characteristics like skin color and hair texture, interactions, reactions and discrimination is so varied that you still sometimes feel totally alone.  But after reading her article, I had finally felt like someone got me!  I, too, grew up feeling like a person and not a color until, as she puts it, was "thrust upon me as I grew older."

Probably the biggest issue I deal with, which she addresses so well, is responding to that question, "What are you?"  I am both black and white, but I still feel that many prefer that I only refer to myself as black.  My hope is once we are more publicly open about our full ethnic backgrounds, then it will become more consciously accepted and realized how diverse we all really are and ultimately allow us to judge people on character, not color.  We are all influenced by so many differences, including race, socioeconomic status, religion, sexual orientation, etc, but in the end, we are all people.